Over the weekend, we became a Blundstone family.  Ever since then, I have been humming the theme song to the Flinstones, but substituting the word Blundstones.    Try it, it’s quite catchy…

I didn’t know this, but Blundstone is a Tasmanian company that was founded in 1870 and they have been making these boots ever since.  The store in Vancouver is only about 500 square feet at the most and apparently, they sell more boots there than any where else in the world!!

This is the boot style that started it all for our family.  About 2 years ago, I convinced my husband to try these boots.  I didn’t really know anyone that wore them, but I seen them around town and thought they would suit him.  And they did.  He wears them faithfully all year, with the exception of summer.

A few weeks ago, I got a bee in my bonnet and decided that my son should also have a pair.  He only wears runners (tennis shoes) to school and on the wet days, he ends up with wet feet.  Although, Blundstones are much pricer than his runners, I thought it would be a good investment.

So, on Saturday, we headed to the store on West 4th Avenue in Vancouver.   We were lucky to have the manager help us and she was great.  My son was measured and tried on a few boots before settling on a pair similar to his Dad’s.  While my husband and son were trying boots, I decided that my daughter should also have a pair.  A few minutes later, she was hopping around the store in a pair of dark brown smooth leather Blunnies.  All eyes were then on me.  Did I need a pair?  Did I want a pair?  Hmm….  Well, I tried on the round toe and the chisel toe.  Both looked and felt great.  The staff were divided and liked both styles.  After much humming and hawing, I bought the round toe chestnut brown. 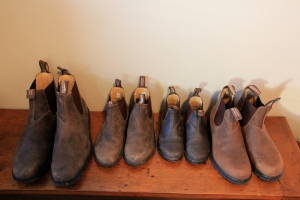 After an hour in the store, and we all went home with Blundstones and I am so happy. The kids are totally rocking the Blundstone style with skinny jeans (my son) and leggings (my daughter).

I have been scouring Pinterest, Polyvore and the internet to find examples of how I should wear Blundstones in style.  But I can’t find many fashion type images!  A family member wears hers with boyfriend jeans and layers long tops.  I am thinking skinny jeans and leggings, but need to try a few outfits before I step out of the house.

So, the fun is just beginning for the Blunstones.

linking up with: The Pleated Poppy, Get Your Pretty On, Vodka Infused Lemonade

One thought on “All in the Family”