One of the first pins I ever pinned to said board was called Lazy Sunday Casserole. It looked delicious and though it hadn’t yet fed my family it did feed my dreams of being one of those moms that cooks a warm, comfort food-type dinner on Sunday nights.

This recipe is one of the most re-pinned items from my boards. Several times each month some other pinner (possibly someone with the same cooking goals and aspirations as mine) re-pins this recipe and each time I see that I think to myself that I should really try that one someday.

Fast forward a year later since the first pinning. Tonight to be exact. A cold, blustery day sounds perfect for a Lazy Sunday Casserole. Let me first say this whole day was anything but lazy. Three loads of laundry, a power walk with my friends and a three-kid movie date doesn’t qualify as lazy in my books.

Anywhoooo…I stopped by the store and grabbed the ingredients (fresh sausage from the deli, not pre-packaged I may add).

I won’t bore you with the prep details but suffice it to say that I was almost two hours from first slice of the peeler to first complaint from my kids that they didn’t like it. Didn’t like it?

Peeling, chopping, arranging, mixing, pouring, baking, browning, adding, basting, testing and serving. Whew. Two hours. I never have claimed to be a whiz in the kitchen but this recipe was not for the lazy in me. The recipe author must be way more experienced in the kitchen than I am. Or, perhaps her usual culinary feats take entire days so two hours FEELS lazy to her. Anyways, I admire her and her accompanying photo looked edible itself.

The actual dish was pretty good, to me and future hub anyways. The balsamic vinegar was an awesome addition! The girls liked the sausages but not much of the veggies. I have also never claimed that they like to try new dishes.

So, a year’s worth of build up and I’ve finally tried it. If I were my sister I could pin this to the Pinned and Tried board but I’m not so I won’t. I will file it away in my mind under Too Lazy for Lazy Sunday Casserole. To the other pinners who will re-pin this pin…and I know they will…enjoy! 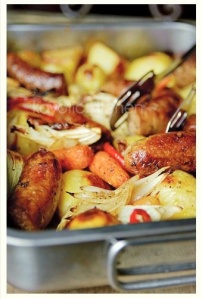