Ok, I’m a little late to the party.  Which party?  The Divergent party, of course.  My sister and co-wearer in grey, gave me the the first book of the series at Christmas time and last night, I finally saw the movie.  Although the reviews weren’t great, I really enjoyed the movie.  So much so, that I started the second book as soon as I got home.

If you don’t know much about Divergent and its series, I’ll tell you a little. There are 5 factions living within a city.  Each faction is known for having a specific value and place within the community.  For example, Dauntless are the protectors and they wear black.

I did a little search on Pinterest and found some examples of the factions and their clothes.

Based on my current wardrobe, I would be Abnegation.  They wear…you guessed it – GREY! 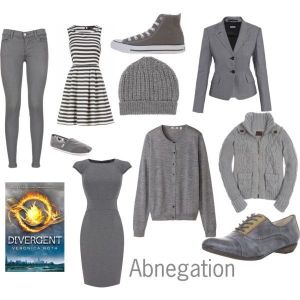 The style of Candor (known for saying what is on their mind and for not liking grey) is also a favourite of mine:

Don’t you think everyone should have a little Amity in their life ? 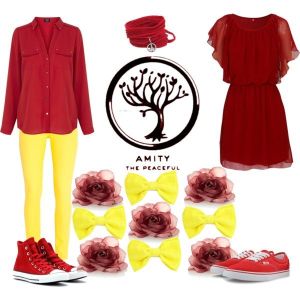 My moto jacket falls under Dauntless:

and my love of the colour blue is Erudite:

Dictionary.com shows the meaning of the word Divergent as:

Overall, I think my wardrobe and I are a little Divergent…which isn’t such a bad thing to have in your life.

linking up with:  The Pleated Poppy, Get Your Pretty On, Vodka Infused Lemonade